As a SCORR client, Chesapeake IRB was an established IRB, aiding pharmaceutical, biotech, and medical device companies as well as academic medical centers and hospital systems. In 2017, Chesapeake IRB was considering a potential merger with another leading research compliance provider — Schulman IRB. The companies were two of the most well-respected in the industry. Together, they would become the world’s leading integrated research compliance review and consulting provider. As the date of the acquisition drew nearer, Chesapeake IRB and Schulman IRB approached SCORR with the following goals:

After exploring multiple naming strategies, SCORR recommended the IRBs consider a new name that would help them communicate the combined benefits of their company. Thus, the first project for the acquisition was to develop a concise, memorable name and identity that embodied the new organization. The goal was to demonstrate a deep commitment to providing integrated compliance services that advance research. Of several names proposed, Advarra (the convergence of ADV=advancing and ARA=protection in Latin) was the unanimous winner.

The logo SCORR developed for the new name featured a color scheme that conveys trust, stability, and innovation and would later lend itself to a larger color scheme for separate business units and audiences. The logomark — a stylized, wideset “A” — symbolizes the pinnacle the company has reached in its industry. The arching crossbar represents the advancement of research and forward motion, indicating that Advarra is involved in every step throughout the process. Finally, the tagline, “advancing better research,” explains in a simple manner what Advarra does for its clients and aspires to do for the broader research industry.

SCORR completed the name and identity update and developed a comprehensive announcement plan with deliverables that included a press release, distribution plan, emails to all stakeholders, social media posts, and detailed communications guidance. The press release was viewed almost 10,000 times within a week of the announcement, and it was picked up by major industry media outlets, including BioSpace, Pharmaceutical Outsourcing, PharmaVOICE, Outsourcing-Pharma, Clinical Leader, and more. SCORR also handled media queries regarding the announcement.

Advarra wanted the brand and messaging to reflect a united organization with a clear focus on partnership and collaboration with customers. Because Advarra now offered a broader, deeper, yet seamless range of research compliance services, it was clear that the brand needed to highlight the company’s strong, integrated approach.

A major aspect of the new brand was the website, and its launch would also serve as the introduction of the combined company. Given the nature of research compliance review, the website needed to do more than inform visitors — accessibility and functionality were essential as the entry point to Advarra’s online platforms.

One of the goals with the new website was to increase conversions and grow the company’s lead pipeline. There was a total of 1,634 conversions in eight months. Due to strategically placed call-to-action buttons throughout each page, the click-thru rates improved month over month. Brand awareness and lead generation tactics also led to increases in traffic and many new users on Advarra’s website. 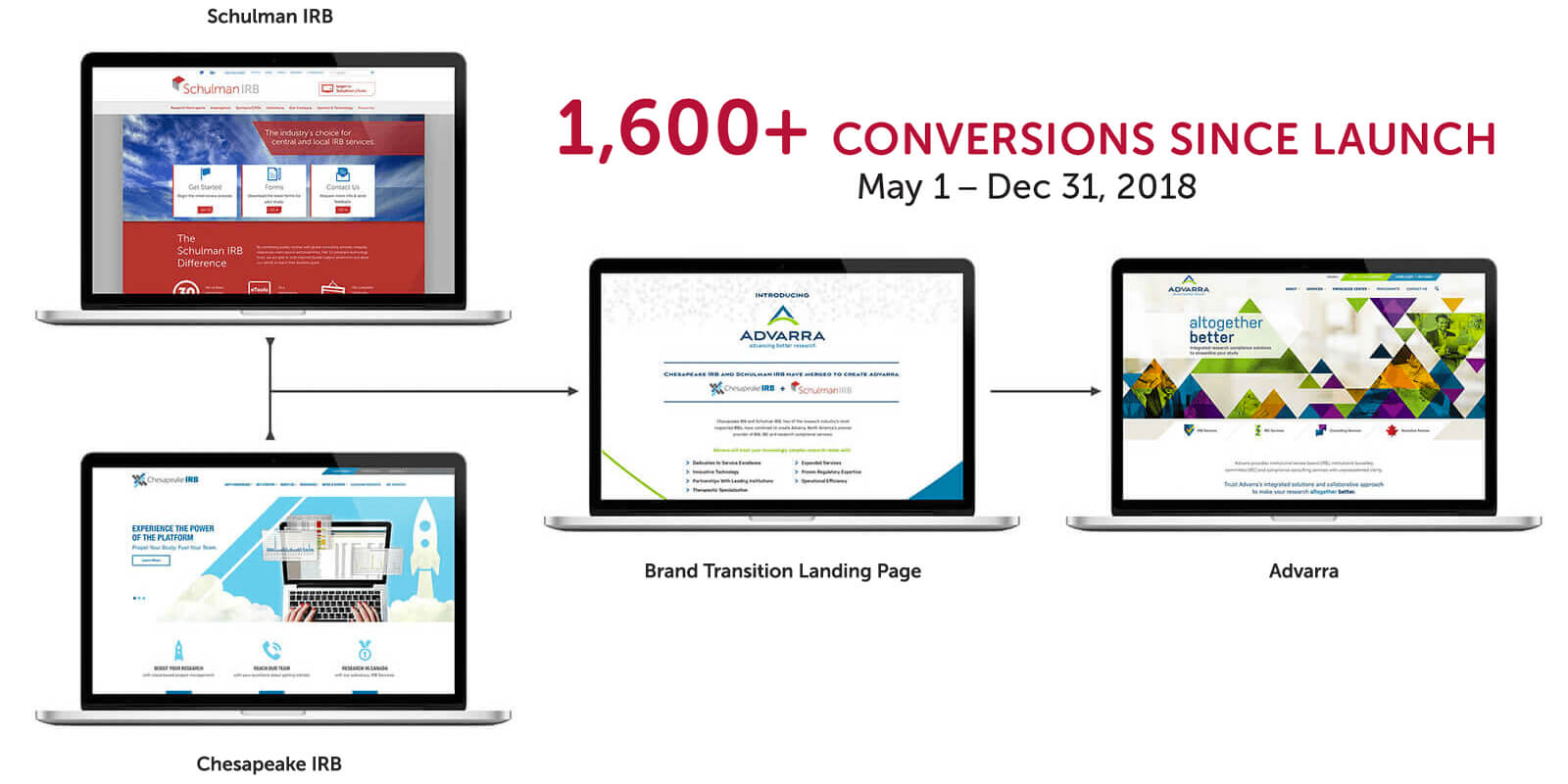 “Many companies have little to no prior merger or acquisition experience and don’t realize that communicating the change can be one of the most time-intensive and sensitive aspects of the transition. We have the full-service capabilities and the experience needed to be their guides from start to finish.” 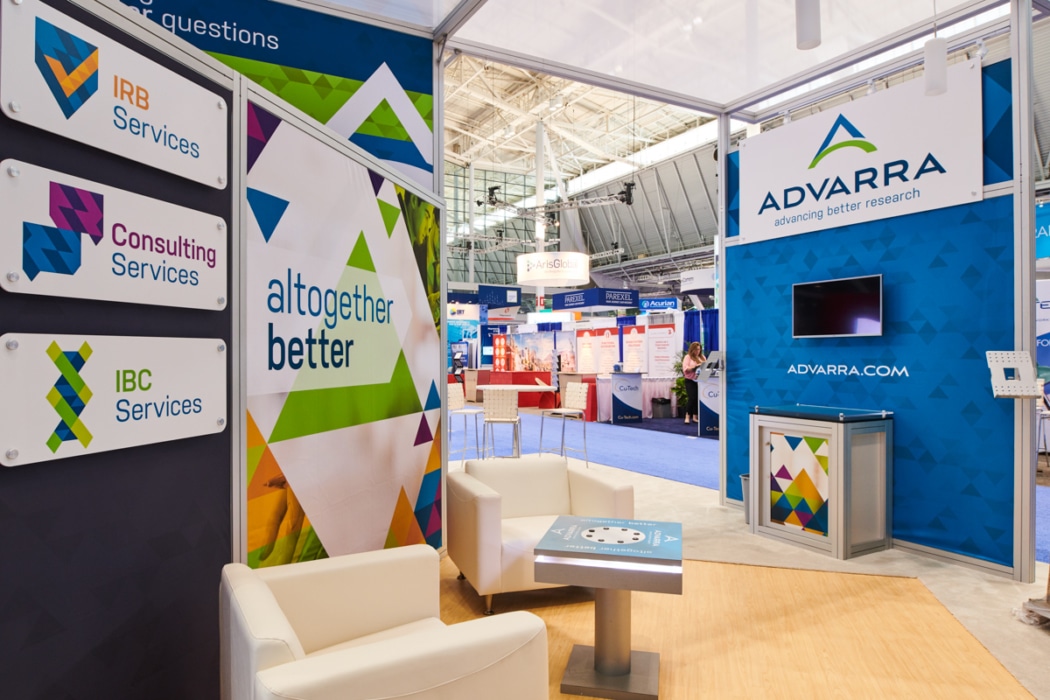 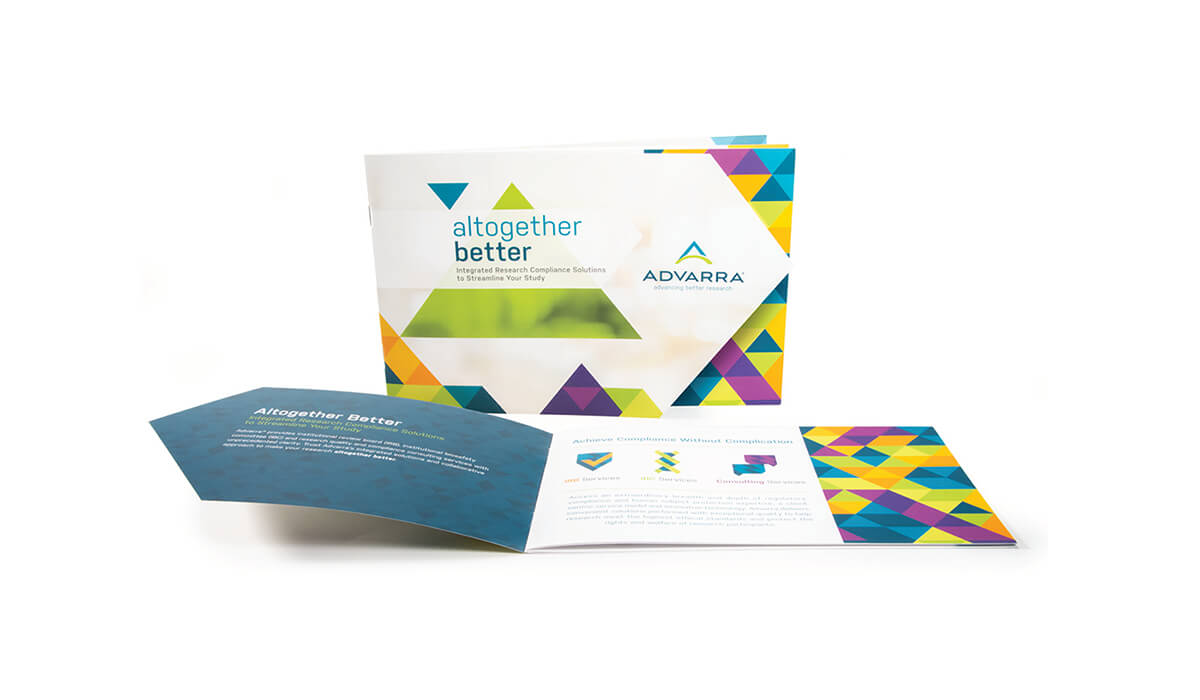 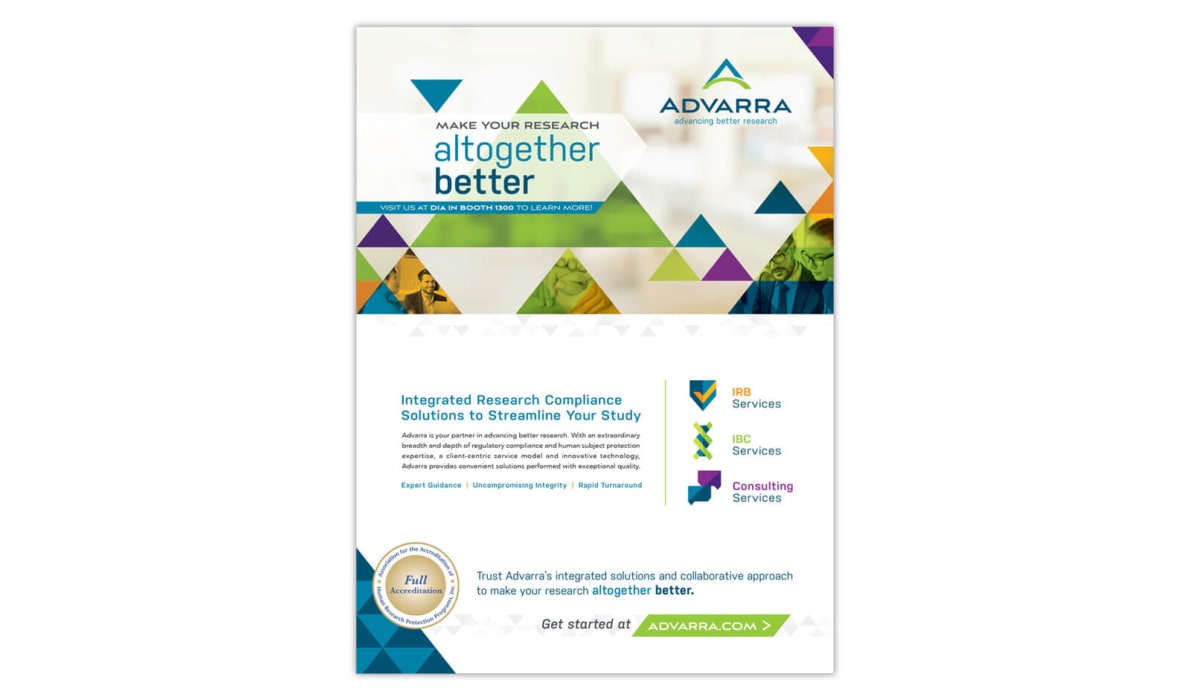 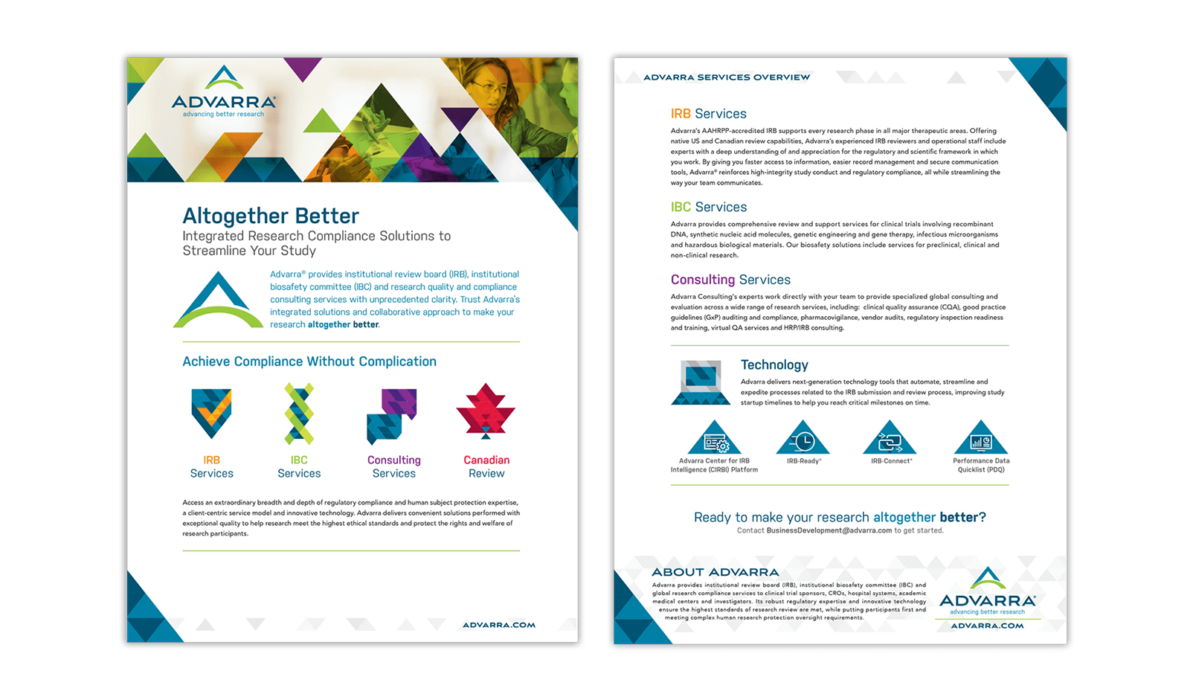 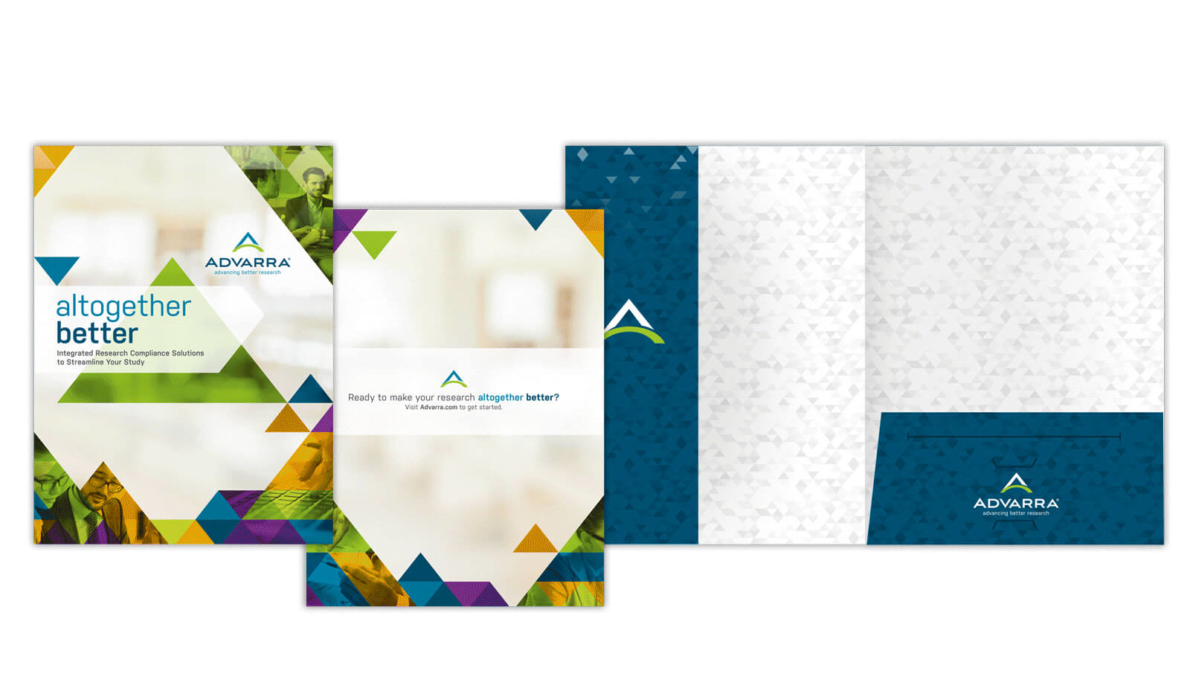 Alongside the website, SCORR developed a flexible suite of marketing materials, a booth design, and sales collateral poised for growth as Advarra expands its global reach and capabilities.

“We were drawn to SCORR for their deep industry knowledge and perspective in mergers and acquisitions. SCORR is wholly immersed in our industry; therefore, they could start strategy planning immediately with no transitional learning period. SCORR delivers exceptional support from strategic planning through tactical execution.”

Advarra successfully launched a new global name, brand, and positioning strategy. Advarra’s projects were managed by an experienced marketing team that had guided multiple mergers and acquisitions and rebrands for global companies — most recently, Chiltern’s acquisition of Theorem Clinical Research and then Chiltern’s later merger with Covance. The SCORR team provided initial templates, budgets, and strategies throughout the merger.

Advarra continues to rely on SCORR as its full-service marketing partner. Just as Advarra provides integrated end-to-end services for its clients, so too does SCORR. Because SCORR’s transition team members were backed by SCORR’s full range of expertise, they remained agile throughout the merger process, in which timelines and details frequently and quickly changed.