While the pandemic and elections dominated the 2020 news cycle, eight compelling-on-their-own forces quietly came together to form the perfect storm for would-be private equity (PE) acquisition targets. We’ve written a comprehensive piece on the reasons behind this perfect storm, accessible here. See an overview of the eight reasons below:

Back in September 2017, $963B was sitting with PE firms waiting to be invested, and this glut of capital, per Bloomberg, was viewed as a distinct problem:

The size of that pile, and the fact that it keeps rising, is making everyone antsy.

Fast-forward just over two years — at the end of 2019, a record $1.45T sat in private equity funds waiting to be deployed on deals: 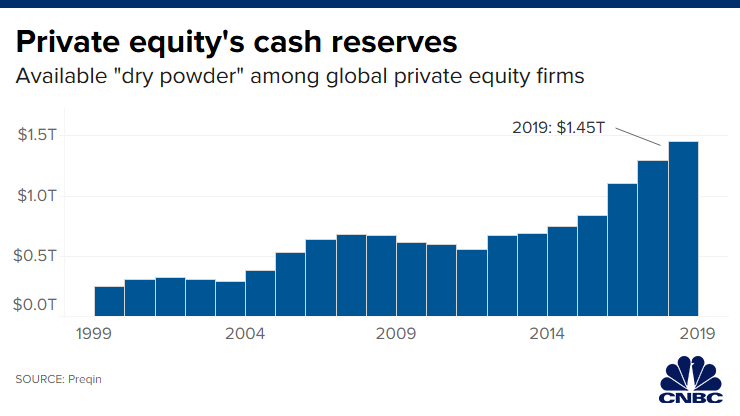 What’s 50% more antsy than “antsy”? The same antsy managers are sitting on 50% more capital than they were in 2017, and all their investors are waiting — with different degrees of patience — for them to put that capital to work.

This recent spike in PE fund investment is more the introduction to the real story than the final chapter: 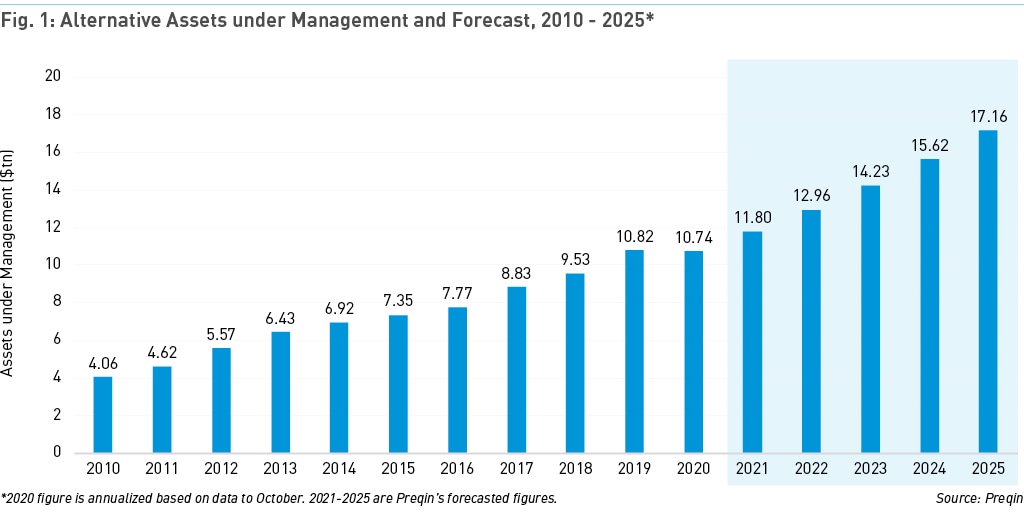 Private equity data provider Preqin estimates that total PE fund assets under management will increase from $10.74T in 2020 to $17.16T in 2025, adding almost as much fresh capital over the next five years as existed in the entire private equity universe just five years ago.

Let’s explore why this market is on the launchpad of such significant growth.

If the number is higher than one (U.S. stocks, in aggregate, are worth more than U.S. annual GDP), stocks can be considered expensive. If it’s lower, they can be considered cheap (to the extent they are over or below that 1:1 ratio). 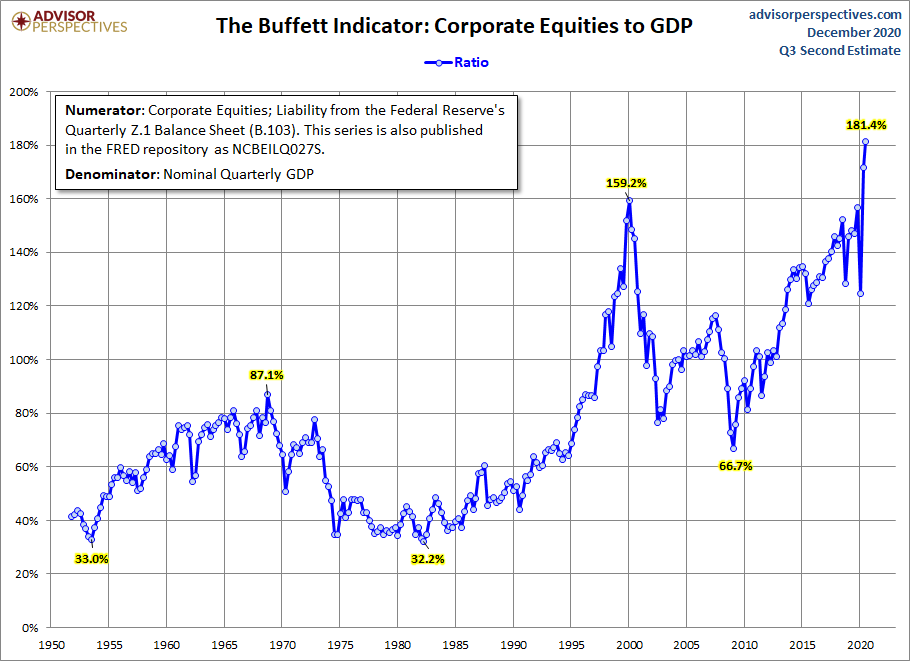 Since the early 1950s, stocks have never been as expensive as they are right now. Put another way, according to the equation that Buffett has said provides “probably the best single measure of where valuations stand at any given moment,” there hasn’t been a worse time to invest in the U.S. stock market in 70 years.

So when the cost of borrowed capital from banks to highly qualified, perceived-low-risk professional investment borrowers (PE firms are at or near the top of this list) is near zero, it pays for them to borrow very aggressively, given nearly any ROI at all will result in a profit on funds borrowed at close to 0% interest.

Given how fierce competition has become between PE firms when it comes to deal sourcing, it logically follows that valuations have to rise. There are a limited number of companies for which to bid and an ever-increasing pool of funds with which to bid for them. And sure enough, valuations are on the rise: 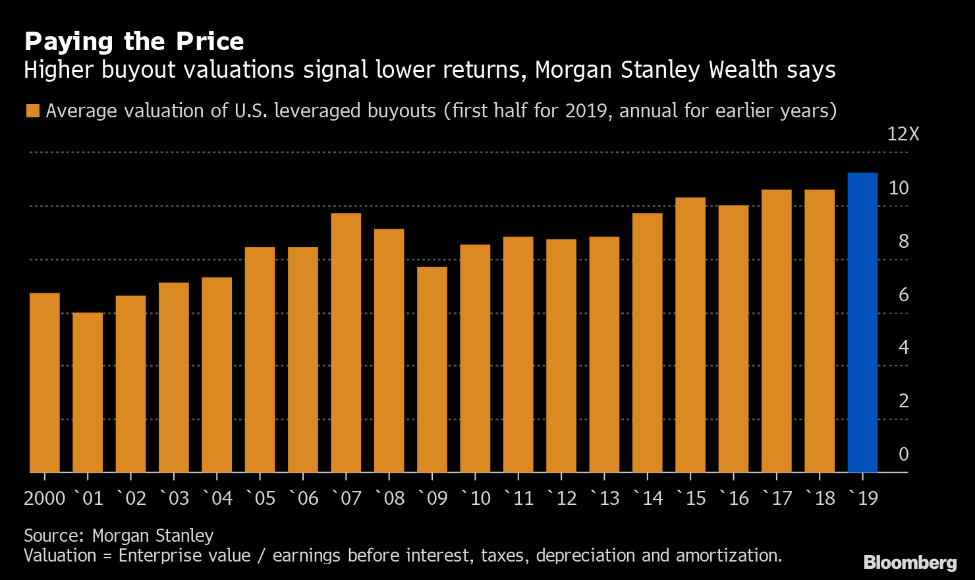 Note that when the chart says that higher buyout valuations “signal lower returns,” that means for the PE funds paying those higher valuations. If you’re the private company being acquired, this trend signals distinctly higher returns.

There’s a reason that 2020 has been called “The Year of the SPAC” in the private equity world. Also known as blank-check companies, SPACs (special purpose acquisition companies) are unallocated pools of capital that then obtain a publicly traded stock market listing — essentially an IPO without a company — with the intent of acquiring a company for that listing. 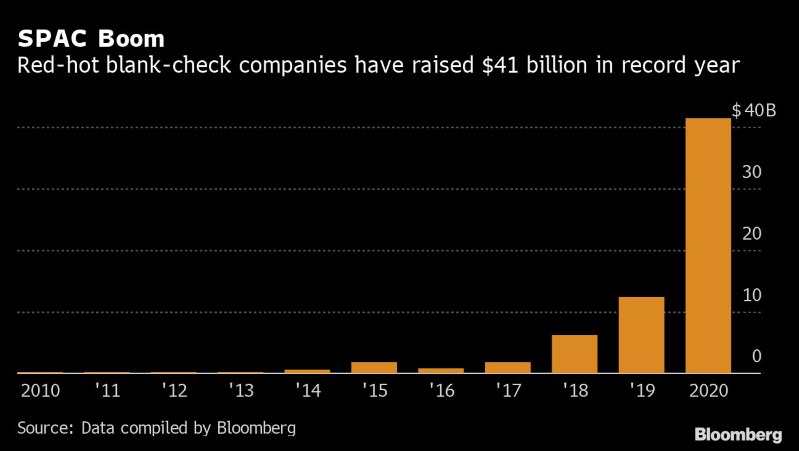 So far this year, more than 10x as much money has been allocated to SPACs as in the 10 previous years combined. The rate of SPAC growth is remarkable, and it offers a new avenue for even more investor funds to seek out private companies. 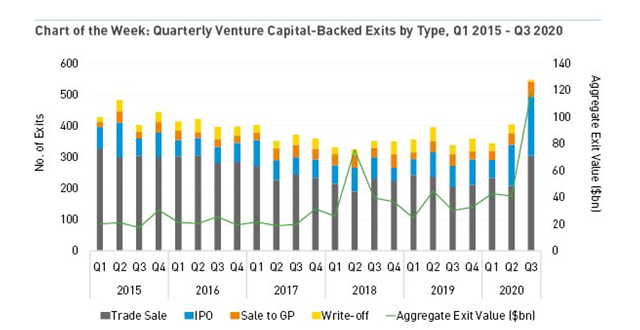 Sure enough, Q3 2020 saw an all-time record for total value of venture capital-backed exits. Competition for startups that have started to gain traction and market share is fierce.

The Bottom Line: No Better Time to Be an Acquisition Target

This is the best seller’s market that there has ever been, and private equity funds are looking — ever more urgently — for the next big thing. Maximizing ROI requires best-in-class branding and a comprehensive, coordinated marketing strategy — positioning your company as its industry’s dynamic, innovative market leader is key to M&A success.

Read the full report for a more in-depth look at the 8 Reasons Why This Is the Best Time Ever to Be an Acquisition Target:

Alex Trigaux has spent his adult life immersed in the financial markets. After an early career at $1B venture capital fund Atlas Venture provided his boots-on-the-ground private equity experience, he has traded stocks and invested independently for 25 years. Alex has contributed to financial publications at industry leaders including Standard & Poor’s Capital IQ and AllianceBernstein, and helped build linguistics-based financial fraud detection modules as a consultant for Boston-based AI startup Topos Labs.

Alex Trigaux has spent his adult life immersed in the financial markets. After an early career at $1B venture capital fund Atlas Venture provided his boots-on-the-ground private equity experience, he has traded stocks and invested independently for 25 years. Alex has contributed to financial publications at industry leaders including Standard & Poor’s Capital IQ and AllianceBernstein, and helped build linguistics-based financial fraud detection modules as a consultant for Boston-based AI startup Topos Labs.