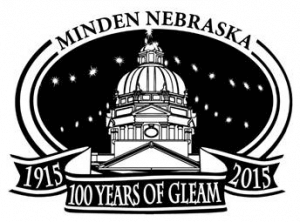 (Minden, Neb.; Nov. 5, 2015) — For a century, families have been traveling to Minden to see the illumination of Christmas lights decorating the Kearney County Courthouse. Minden, a small town in central Nebraska, will kick off its season-long Christmas festivities Friday, November 27, with its biggest celebration to date in honor of its 100 year anniversary. There are many family-friendly events planned by the Minden Chamber of Commerce to celebrate the centennial anniversary, including:

Families are also invited downtown on the square at 5:30 p.m. to view the crowning of Miss Christmas City, followed by the official lighting ceremony and an illuminated parade.

This year, in honor of the milestone, Minden has a new attraction: an ice skating rink. From November 27 to December 12, visitors will get to skate, and enjoy special events and promotions planned around the rink.

In 1915, the city hand-dipped electric lights and hung them on the county courthouse, which became an annual holiday tradition. In 1986, then Governor Benjamin Nelson officially proclaimed that Minden be recognized as “The Christmas City,” due to its ability to attract visitors from all over the Midwest. In recent years, more than 15,000 bulbs have blanketed the Minden courthouse and downtown streets for the holidays.

“Every year, thousands of people visit Minden to see the lights and enjoy the friendly, family atmosphere,” said Marcia Davis, Minden Chamber of Commerce administrator. “We expect this year’s celebration to have the biggest turnout yet, since this is truly a once in a lifetime experience.”

The kickoff celebrations are attracting notable Nebraska names. In addition to Minden leaders, U.S. Sen. Deb Fischer is expected to be in attendance, along with leaders from surrounding communities, including Kearney, Holdrege and Wilcox.

This event produced in part by a grant from the Nebraska Tourism Commission. For more information, call 1-888-444-1867 or visit www.VisitNebraska.com.

About The Minden Chamber of Commerce and the Century of Lights

The Minden Chamber of Commerce is organized for the purpose of advancing the economic, commercial, industrial, professional, civic and cultural interests and general welfare of the City of Minden, Nebraska, and its trade area. Known as Nebraska’s Christmas City, Minden began the town-wide celebration in 1915, and today, the colored lights are still a source of pride for the community and state. The Minden Chamber of Commerce is proud to be a part of Minden’s past and will continue to work toward its bright future. Learn more at MindenNE.org.